On Saturday, we Picts took a mini road trip to Baltimore in order to meet up with a friend, her husband and kids, who live in Maryland.  My mother-in-law is actually from Baltimore originally yet I have only actually been there once before and that was way back in 1995.  It only takes us about two hours to get there so we really ought to take trips there more often in future.

It was a grey and rainy day so our choice of venue for the get together was perfect.  We met at the Maryland Science Centre.  It has a reciprocal arrangement with the Franklin Institute so we could use our membership pass from there to gain free entry at the Maryland Science Centre.  Despite that, the cashier insisted on charging us for tickets for two of the kids.  I was about to sally forth with righteous indignation when she revealed that the price for those tickets was $2.  I thought I would let that pass.  It was a dollar entry day.  That meant the place was hoaching, a good Scots word meaning teeming.  In fact, as we were leaving, there were still queues outside the door in the pouring rain.

We started off in the dinosaur section.  There were lots of replica skeletons rampaging through the space which the kids could get up close to and thus gain a sense of scale.  My kids especially liked being able to touch the skulls and they spent a long time brushing sand off fake fossils, measuring bones, making footprints and placing bones in position in order to rebuild a fossil skeleton.  There was also a live lizard in a tank and a very chubby and very indolent bullfrog named Jabba who the younger kids found fascinating.  They also spent a great deal of time lounging around in dinosaur footprints.  It was actually great that they spent so long in that section since there is not a dinosaur section in the Franklin Institute and the kids found it so engaging.  I mean, what kid doesn’t love dinosaurs? 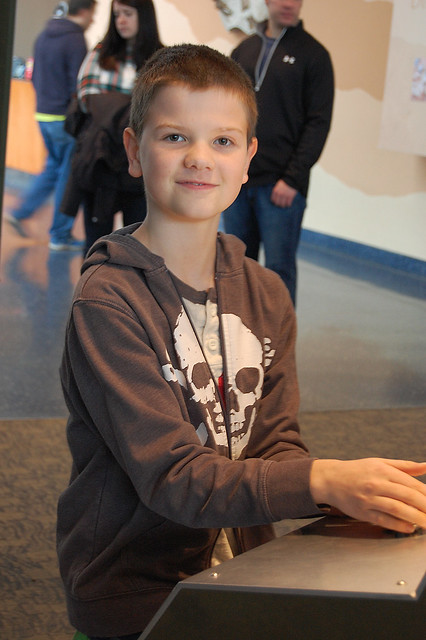 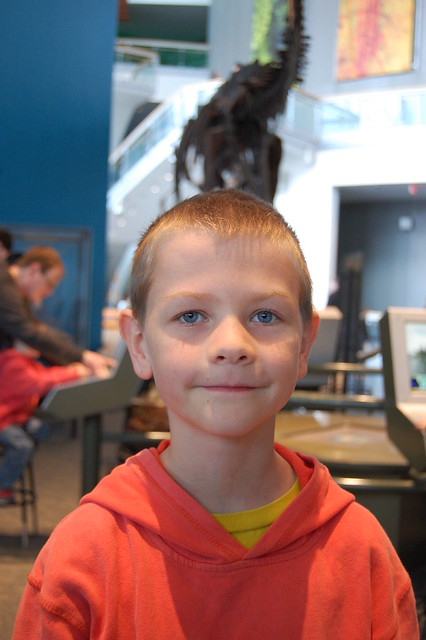 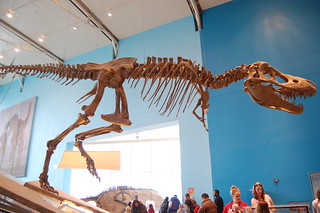 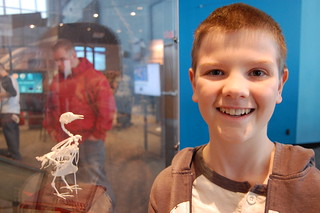 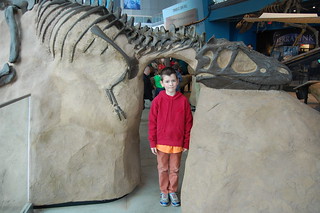 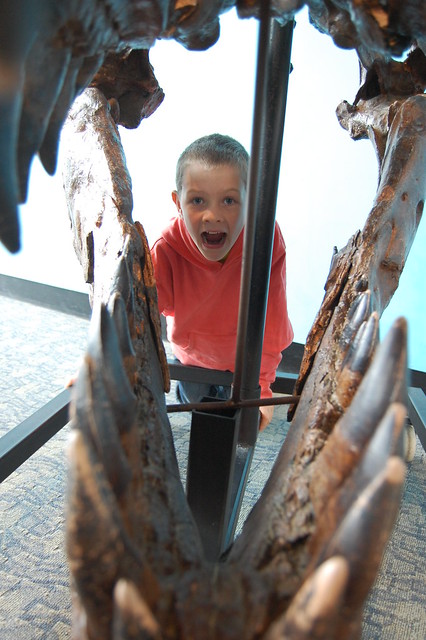 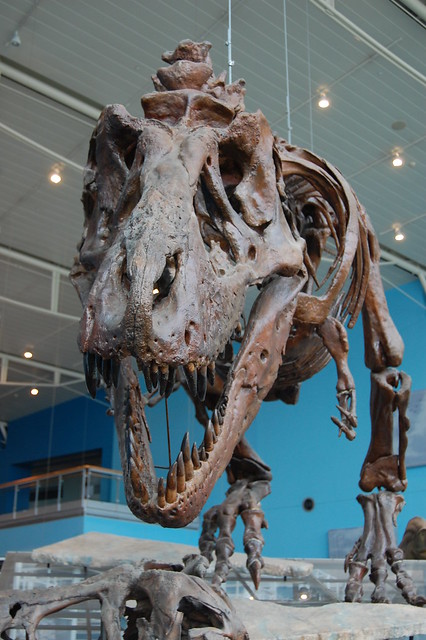 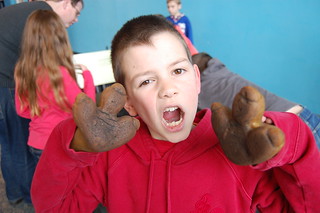 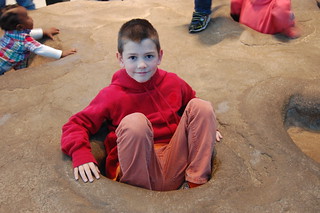 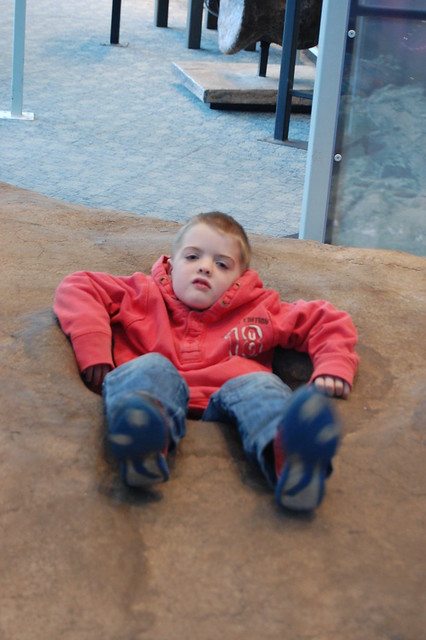 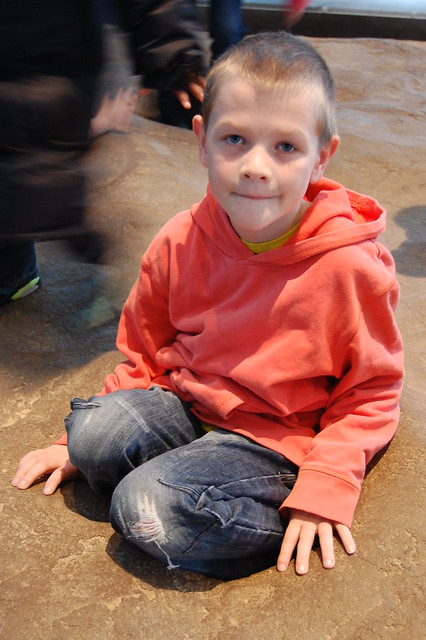 We then moved on to the earth science section.  There the kids had a lot of fun creating a tornado.  It required the air to be undisturbed to form a funnel so our kids got uber-frustrated when a heap of other kids kept sticking their hands into the air stream but that just made the sense of accomplishment that bit sweeter the times that they finally got it to swirl upwards.  They then all used Google maps to find the location of their homes, with my kids finding both their house here in Pennsylvania and our former home in Argyll, Scotland, and dressed up in polar explorer thermal jackets.  Another big hit was a large bowl that contained “clouds”.  The children spent ages wafting their hands through the vapour, blowing it away from the bowl’s edge and my 9 year old even stuck his head in it. 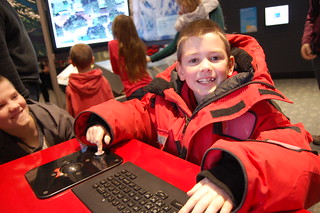 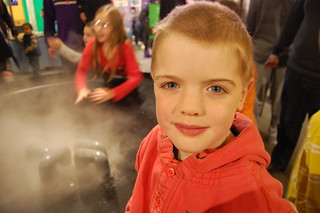 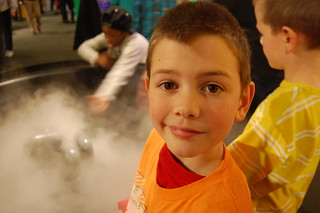 There were also experiments we were familiar with from the Franklin Institute and science centres we had visited back in Britain.  While my friend’s kids were patient enough to wait for an opportunity to use them, my kids could not be bothered with hustling their way through the packs of kids to try and get a turn.  I guess my British kids are just way too used to queuing to deal with the chaotic thronging of so many other kids.

Meanwhile I was started to feel starved of fresh air and felt like I was experiencing hot flushes.  The grown ups were starting to feel frazzled and the kids were beginning to get fractious.  We could have had a “fun” competition over which child was going to blow a gasket first.  We, therefore, undertook a rapid fire and incomplete tour of the human body section.  My kids enjoyed running through a maze-like set-up which I think was supposed to teach them about the structure of cells but which they just saw as a much-needed opportunity to run around and burn off some energy.   That made it clear that the kids were no longer engaging in the content of the Science Centre so we said our farewells to our friends and headed back out into the welcome fresh, chill air. 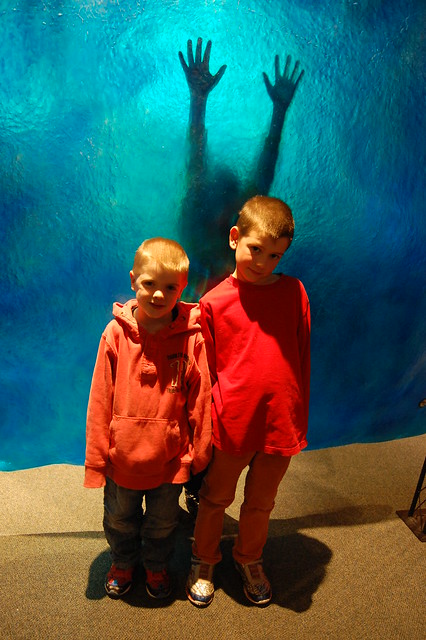 It was a good Science Centre and my kids especially loved the dinosaur section but I think my kids have been spoiled by their several visits to the Franklin Institute.  Possibly they would have enjoyed their visit more had there not been an overwhelming number of people visiting, thanks to dollar day, because my boys don’t do well with crowds in confined spaces, especially when those crowds are not forming orderly queues.  However, it is definitely worth a visit if you are in the Baltimore area with kids and it certainly appeals to a wide age range.  We will definitely go back to Baltimore some time to explore it’s other attractions.