My kids were giddy with anticipation over Halloween this year.  Their experience of their first American Halloween had been a wonderfully positive introduction to life in America for them. They loved everything about it and were eager to repeat the same fun experiences this year.

Having selected a pumpkin each when we visited the pumpkin patch, the boys settled on imagery and I set about carving them.  The reason I did the carving is that, with the exception of the smallest pumpkin, which really was tiny, the skins and flesh of the chosen pumpkins was extremely tough.  I resorted to using exceedingly sharp kitchen knives in place of the carving tools and, of course, the children could not be let loose with kitchen knives.  That really would have been a Halloween horror!  So we ended up with a large Minecraft Creeper, a baby Creeper, a galloping horse and the head of Jack Skellington to place on the steps leading up to our front door.

The younger three boys had Halloween celebrations at their Elementary School.  They each had parties full of crafting, snacking and games and were all involved in the Halloween parade.  The High School band played while all of the costumed children walked in a large square on the playing field.  As a member of the first Kindergarten class, our 5 year old was actually the leader of the entire parade.  He was clearly loving it, waving to the crowds as he passed them, though his Iron Man mask meant he could barely see where he was going and he had to be steered in the right direction by his teacher.  That morning I had told the children that I was going to levy a tax on them of one piece of their Halloween candy for each Elsa, Anna or Olaf costume we happened across on the day.  There were five Elsas in my youngest son’s class alone.  My kids said no dice to the tax proposal.  There were some really inventive costumes on show and it was fun to see all of the kids enjoying themselves.

My boys had daytime costumes, appropriate for school (Iron Man, Boba Fett and a weird Dark Knight Ninja combination that my 9 year old insisted on cobbling together) and different costumes for evening.  I got the majority of their costumes from thrift stores and the younger ones like to play dress up throughout the year so I don’t mind the costume changes at all.  My oldest son was a Clone Trooper, the 9 year old was Star-Lord (because he is obsessed with ‘Guardians of the Galaxy’), my 7 year old was a Werewolf (he has been longing for a werewolf costume for years) and the youngest was Frankenstein’s Monster (his favourite classic monster).  I also dressed myself up as a Vampire, complete with pallid face and bright red lips.  Thankfully I was not the only adult wandering the streets in costume or I might have felt like a total pillock but the kids appreciated my efforts and my get-up entertained them so any embarrassment factor was worth it. 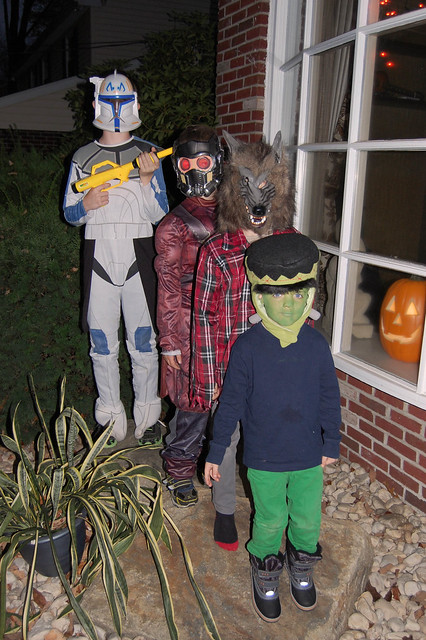 Together with one of the boys’ friends, my monstrous mob traipsed the streets of our neighbourhood for two hours. Mr Pict had devised the route as if he was a military General manouvering troops.  At first they were part of a pack of neighbourhod kids but gradually they pack drew out into a long line which was probably easier for each household to manage instead of having to open the door to a dozen kids bellowing “Trick or Treat” in unison.  The majority of houses in our neighbourhood were participating in Halloween and handing out edible treats but some had gone to incredible effort to entertain the little ghouls.  One house had set up their garage as a den of horror.  My 9 year old and his friend refused to even enter and the 7 year old came out howling, but the other two loved it.  Another house had set up three rooms in their house to be a haunted house full of spooky props and people in costume.  My 9 year old again didn’t go in but everyone else had fun on their spooky tour.  Our neighbours had set up their porch with elaborate decorations including a zombie baby doll, Frankenstein’s Monster sitting in an electric chair and the Bride of Frankenstein standing alongside them.  My boys loved going up to the Monster, especially the little one who declared he was Frankenstein Jr.  It was a really fun night and my kids came home with their Halloween buckets full to beyond the brim with sweeties, chocolate and crisps which they then spent half an hour trading up. 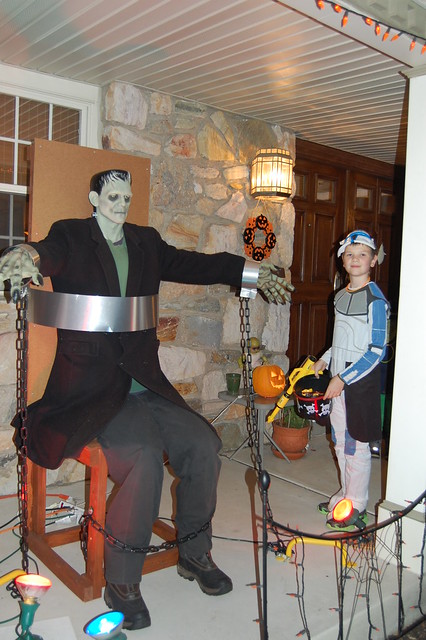 And they never did give me my ‘Frozen’ tax. 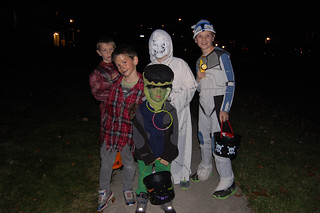 6 thoughts on “Our Halloween”