It is a weird experience to have now lived in America long enough (a year last Friday) to be cycling round the same events and holidays and experiences.  We arrived in the country amid the build up to Halloween and now here we are with Halloween on the horizon once more.  This time last year we went to Shady Brook Farm for the kids’ first ever experience of picking pumpkins to carve; yesterday we returned to Shady Brook Farm to pick out some pumpkins to carve this year.

The farm runs a whole Halloween event.  In the evening, adults – or at least adults who like a thorough scare and have strong bladders – can explore various barns, fields and corn mazes in the dark while people dressed as various horrific things terrorise them and they encounter horrible props.  In daylight, it is still possible to wander through the attractions but, of course, there are sources of light and there are no actual human horrors lurking in corners, just grotesque props.  We, therefore, started our afternoon at Shady Brook Farm by heading into the Horror Barn.  I went in first with my 11 and 7 year olds.  Later Mr Pict went in with the 5 year old.  Our 9 year old didn’t want to do it at all, which is fine.  Getting the creeps is not for everyone.  The thing that unsettles me in the barn is actually the claustrophobia.  The narrow corridors created by hoarding and the darkness creep me out far more than corpses dangling from a ceiling and vampiric girls chewing on pet cats.  However, this time around, the first room was filled with clowns.  I have a proper, deep-seated fear of clowns.  Even happy clowns give me serious chills so horror clowns really make my flesh crawl and my spine judder. 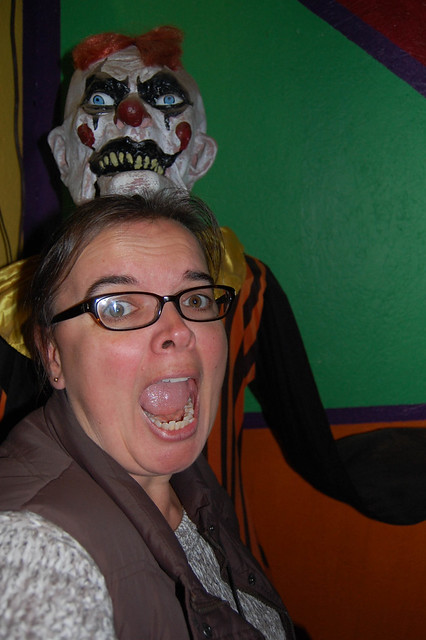 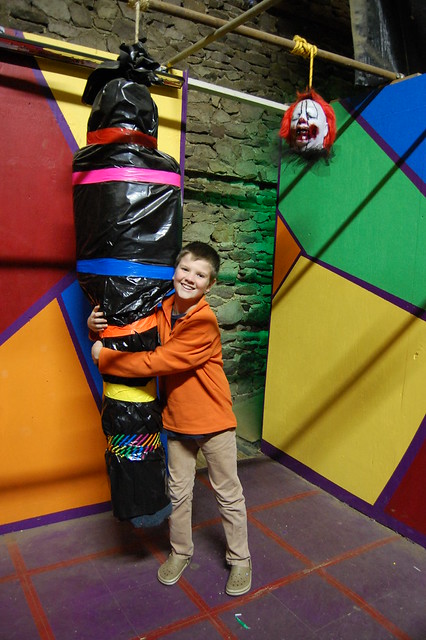 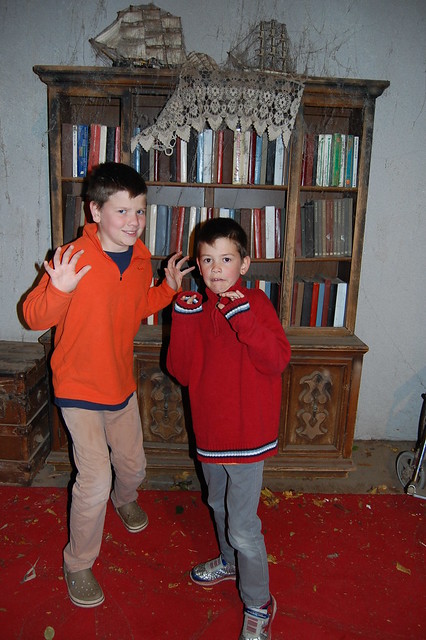 After the horror barn, we went into another barn that is a 3D Alien experience.  It’s pretty lo-fi but really effective.  We were each handed a pair of 3D spectacles and then we entered the darkened barn where the walls of the corridors had been painted with fluorescent paint that vibrated and sprung forward from the walls.  There were also dangling dayglo threads and the odd alien figure lurking in a corner with its big eyes and long fingers.  There was also a walkway through a rotating cylinder that was dizzifying and the exit was via two large inflatable pillows that we each had to squeeze between.  It was exactly the same as last year but none of us minded because it was a ton of fun. 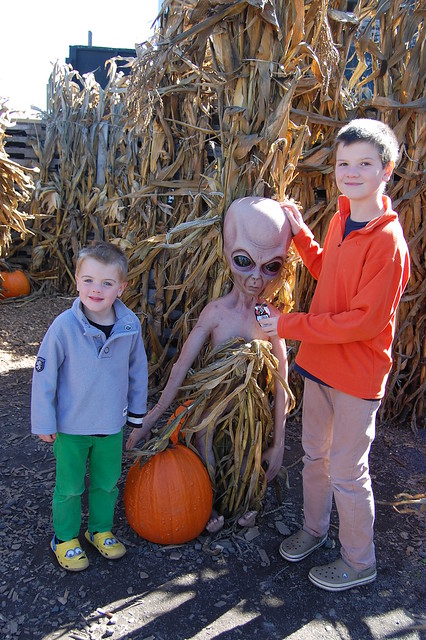 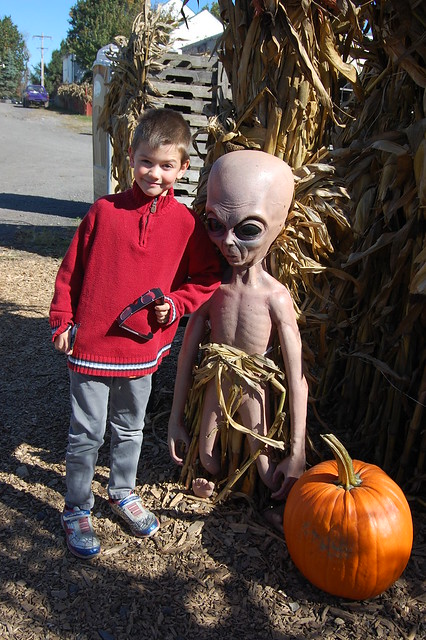 The boys then played on various items of play equipment: an inflatable assault course, a bouncy slide, giant bouncing pillows to trampoline on, wooden play equipment with slides and fireman’s poles and a rope spiderweb.  They also snacked on pretzels because we cannot take those kids anywhere in Pennsylvania without them eating pretzels.  After the snack stop, we decided to undertake one of the mazes.  Last year we had attempted the large corn maze and became terribly lost and bewildered and then panicked as one by one the kids all needed to pee.  In desperation, we actually exited via an unofficial gap, having entirely failed to discover each of the designated stations and the exit.  This year, therefore, we stuck to the weenie haystack maze and the kids had fun playing hide and seek among the haystacks and crawling through and inside the corn tunnels and the corn wigwam. 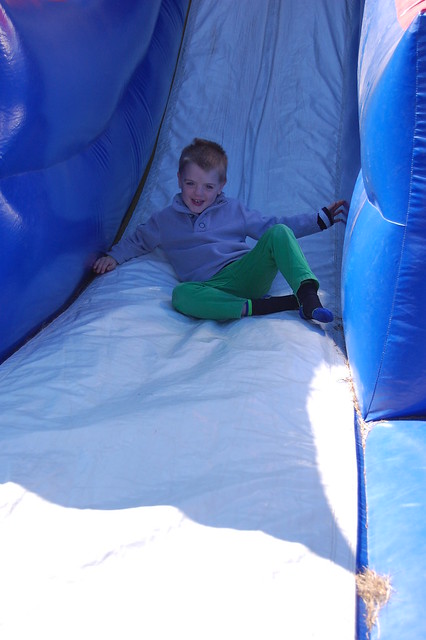 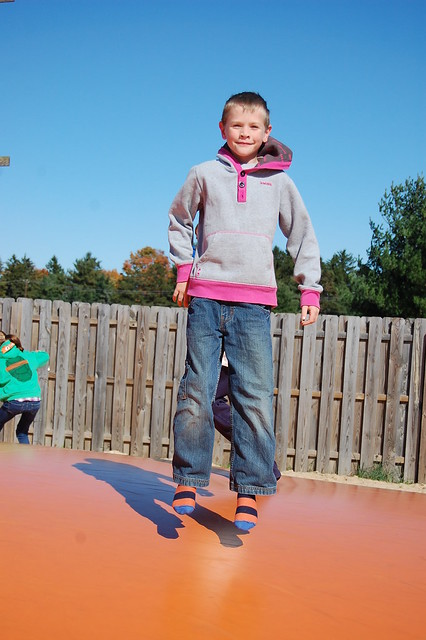 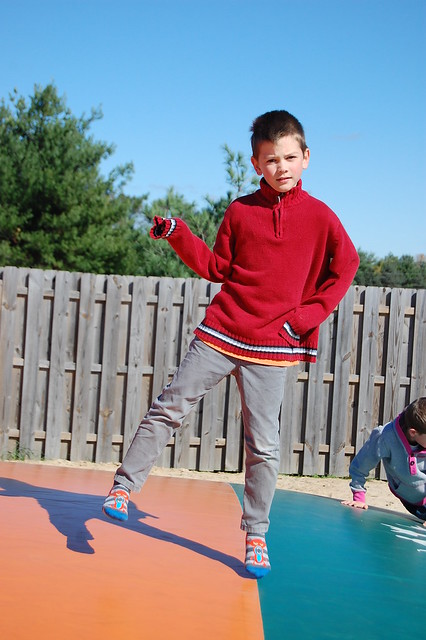 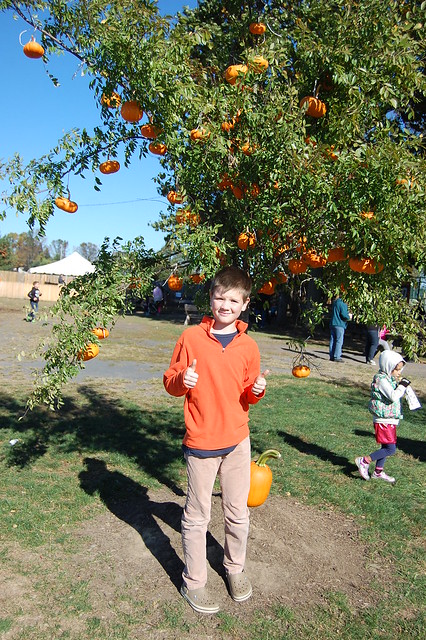 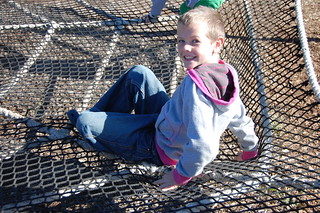 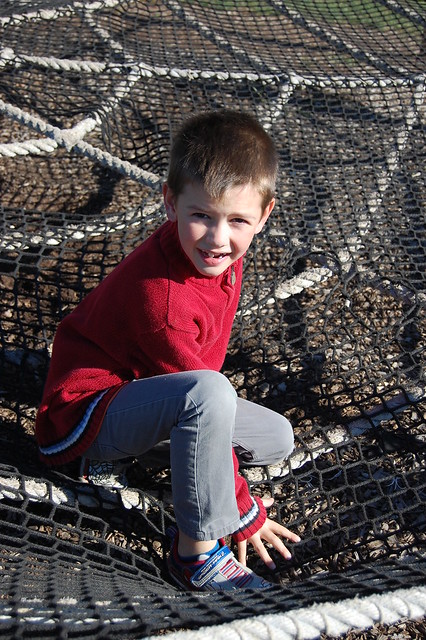 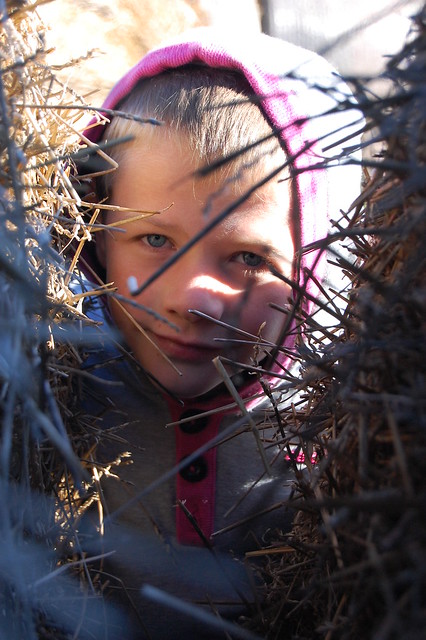 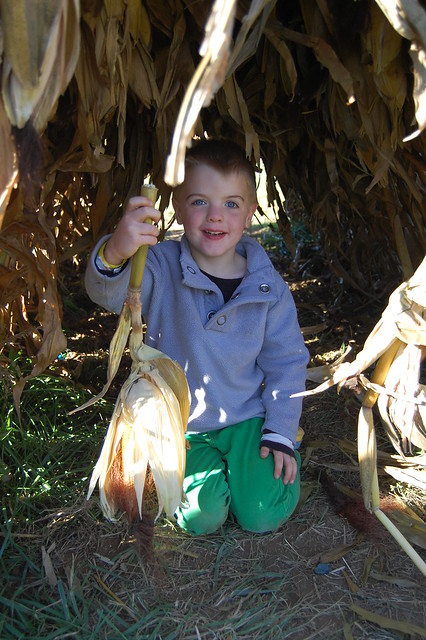 A tractor-towed wagon ride delivered us to the pumpkin patch where the kids selected and rejected and selected again about half a dozen pumpkins each.  A couple of them were even set on taking home pumpkins that were too heavy to lift.  They were told to scale back their ambitions.  With carving designs in mind, they finally chose pumpkins they felt were the perfect size and shape for what they wanted to create and construct and two were even green instead of the traditional orange. 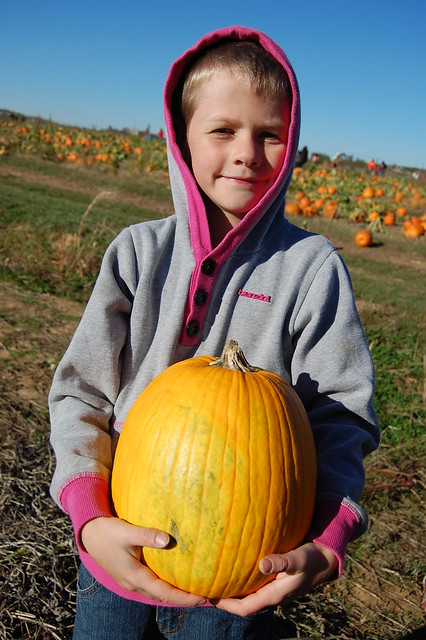 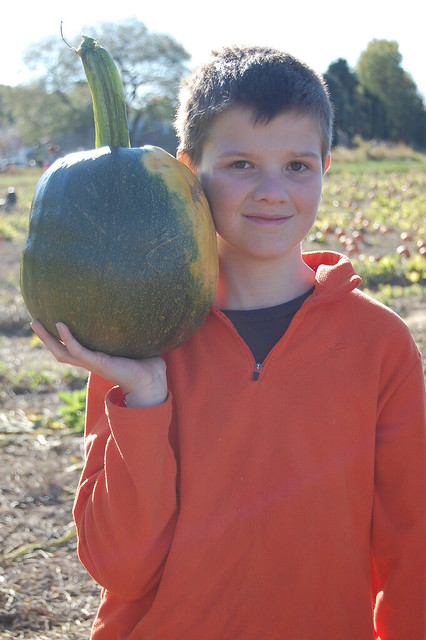 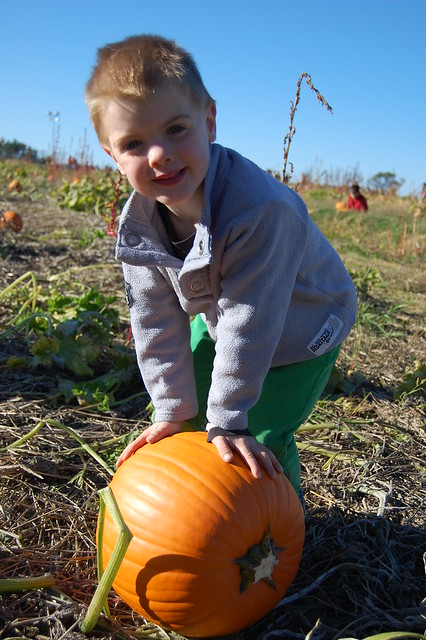 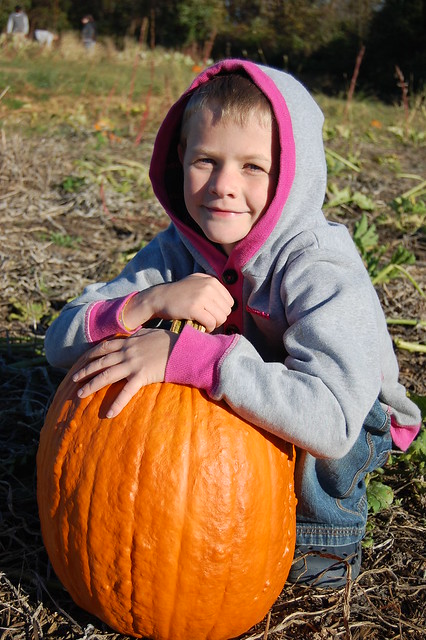 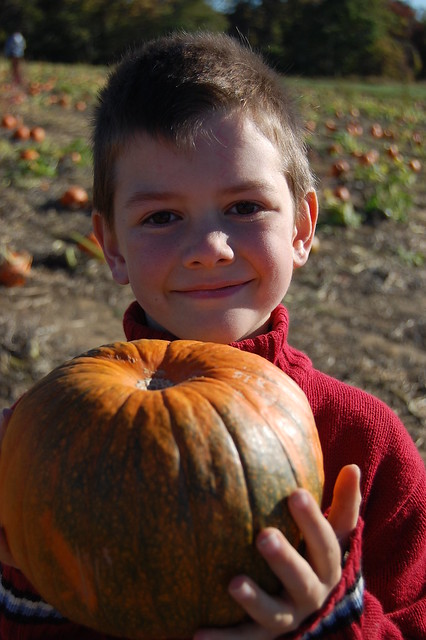 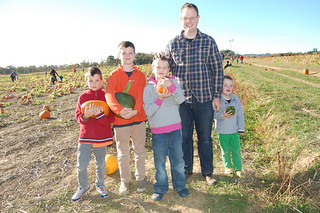 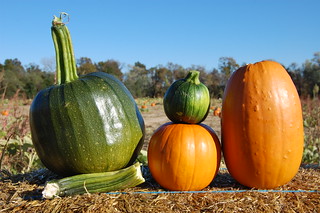 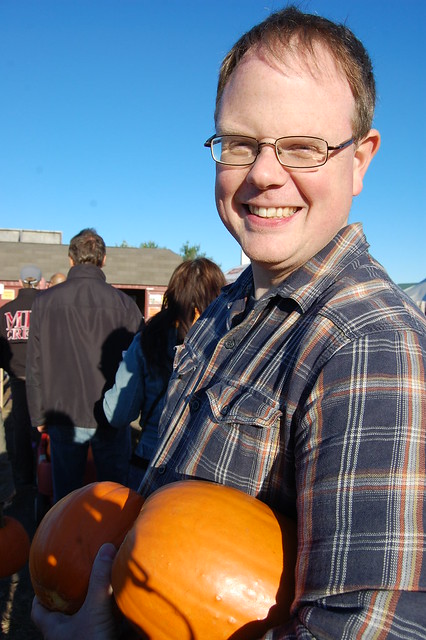 It’s rather nice to be cycling through things again as it means we are establishing new traditions in our new country.

*PS  I am unsure as to why some of my photos are appearing so small.  I have just moved to using Flickr to host my photographs for the blog and I clearly have not got the hang of it.  Hopefully it is not too visually annoying.*