I am afraid Hermes is one of those non-entity Greek gods to me.  As much as I know he makes an appearance in a variety of mythological tales and that he is the patron god of lots of different people and things, Hermes just has not left a big impression on me.  As a result, my drawing had to contain the few components of Hermes’ characterization and representation that had left an impression.

The role Hermes is best known for fulfilling is that of Messenger of the Gods.  I think that meant he delivered messages not just between the different Olympians but also between the gods and mere mortals.  Moving at high speed in order to conduct these messages, I envisaged him as a distance runner.  Having previously drawn a marathon running zombie during the 2012 Olympics, my drawing of Hermes took on the same composition and form.  I then incorporated the visual elements that serve as signifiers of Hermes – or at least the best known of those.  I, therefore, gave him a winged helmet and wing shaped embellishments on his track shoes.  Hermes is also associated with the caduceus (which Wikipedia tells me is kerukeion in Greek), a staff entwined with two snakes and often topped by wings which has been confused with the symbol of medicine which is actually the Rod of Asclepius.  Whatever.  I drew one of those staffs onto Hermes’ vest. 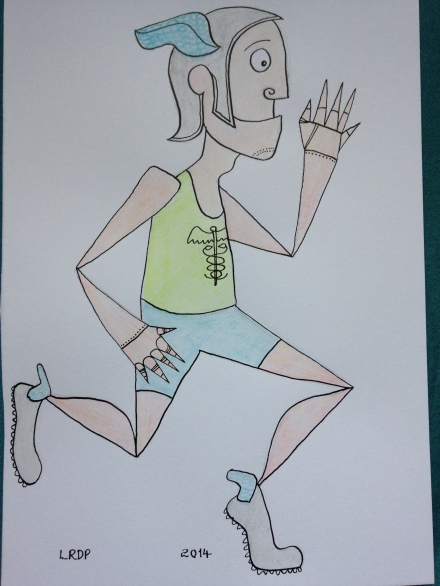 Hopefully, despite not being genned up on all things Hermes, I have managed to communicate that he is the figure represented in my drawing.