Something Mr Pict and I have always loved during our travels around America, on our various road trips when we lived in England and Scotland, is happening upon some example of “Roadside America”.  It’s serendipity of the bizarre, kitsch, random and weird.  Often those unexpected, chance discoveries became the highlights of our holiday.  For example, driving the wrong way through the drive-through liquor store owned by the sister of Jerry Lee Lewis and then ordering soft drinks has seared itself into our consciousnesses than our tour of a plantation house in Natchez on the same trip.

This past weekend, we decided to take a break from all the house moving chaos and take Mr Pict’s parents on a day trip to see the Poconos.  We did our traditional jaunt around Country Junction (the “world’s largest general store”) which never fails to delight the boys and then we headed off in the direction of Jim Thorpe as we had yet to do anything other than drive through that town.  However, on the way we drove through a town named Weissport which was holding a Redneck Festival.  Well forget Jim Thorpe!  We had other times when we could visit Jim Thorpe.  We had to stop and visit the Redneck Festival with its promise of some “Roadside America” fun.

I don’t know whether this is a compliment or an insult but it was actually very difficult to tell the “fancy dress” rednecks apart from the genuine article.  No matter whether authentic, faux or randomly visiting, as we were, everyone was having some good-natured (if not politcally correct) fun.  There was a monster truck  but there was also a flotilla of racing portaloos.  I dread to imagine what those chariots use as fuel!  There were raffles stalls and auctions.  There were people selling redneck memorabilia and items every redneck needs.  There was a hick version of a “Mr & Mrs” quiz taking place on a roughly hewn stage while the audience watched on while perching on hay bales.  The participating couples were trying to win an overnight stay in a hotel.  One of the questions was where they had first met each other.  Two of the answers, held up on placards to see if each member of the couple responded the same way, were “At the Court House” and “In the line at Walmart”.  You probably could not script this stuff if you tried.

Rather randomly, there was a whole tent dedicated to zombies.  It appeared to be a promotion for a forthcoming event.  People were paying to have their faces painted up as zombies and I must say that the face painters were doing an incredible job with their special effects.  Some folks leaving that tent looked genuinely undead.  Once made-over as a zombie, the people were posing for photographs using various gruesome props.  My kids, of course, being the ghoulish children of this zombie loving mother, were drawn like moths to the flame to all the grotesque props, some of which were genuinely disturbing. 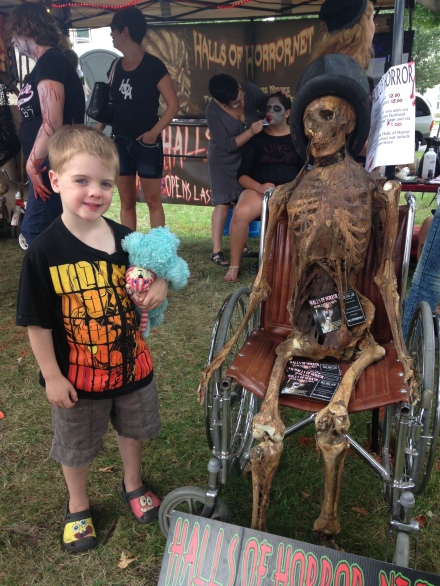 Of course, we had to sample the funnel cake because you cannot go to a fair or festival without eating funnel cake.  However, Mr Pict also decided to purchase some deep-fired Oreos.  Yes.  Oreo cookies that have been battered and deep-fried.  Of course, we all had to sample them just to see what this “delicacy” was all about.  I may be Scottish but I have never eaten any deep-fried confectionery.  This, therefore, was m very first deep-fried cookie (or biscuit for my UK chums).  It was surprisingly un-nasty.  An unfried Oreo still takes the win by a country mile but I had expected the deep-fried version to be rank.  It was actually OK.  Not something I feel the need to repeat but certainly not in the range of horrible.  What was rather appealing about it was the warmth of the interior of the cookie.  If I can find a way to gently warm Oreos, they could become a worrying addiction.  I might have found something to dunk in my tea! 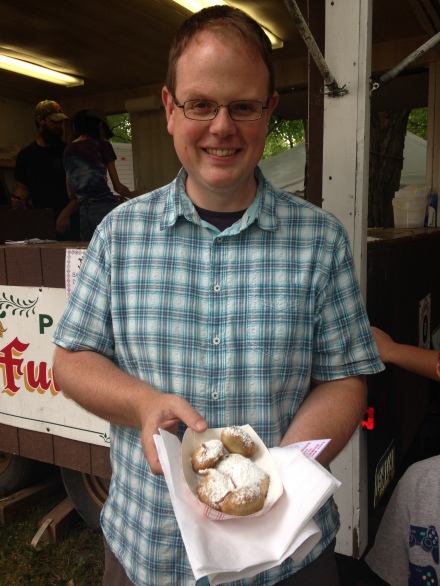 Next time you pass a celebration of all things Redneck, I do recommend that you pull over and join in the fun.