Our oldest son’s eleventh birthday fell on the third day of our Spring Break vacation. We, therefore, began the day with card and gift opening.  He was delighted with everything he received: games, books and video game stuff and clothing. 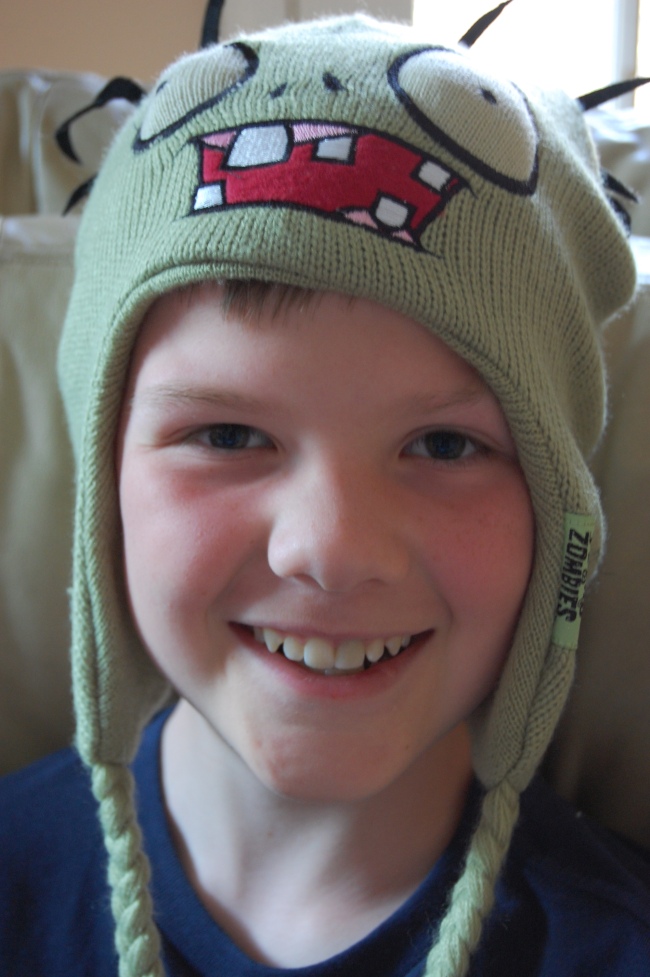 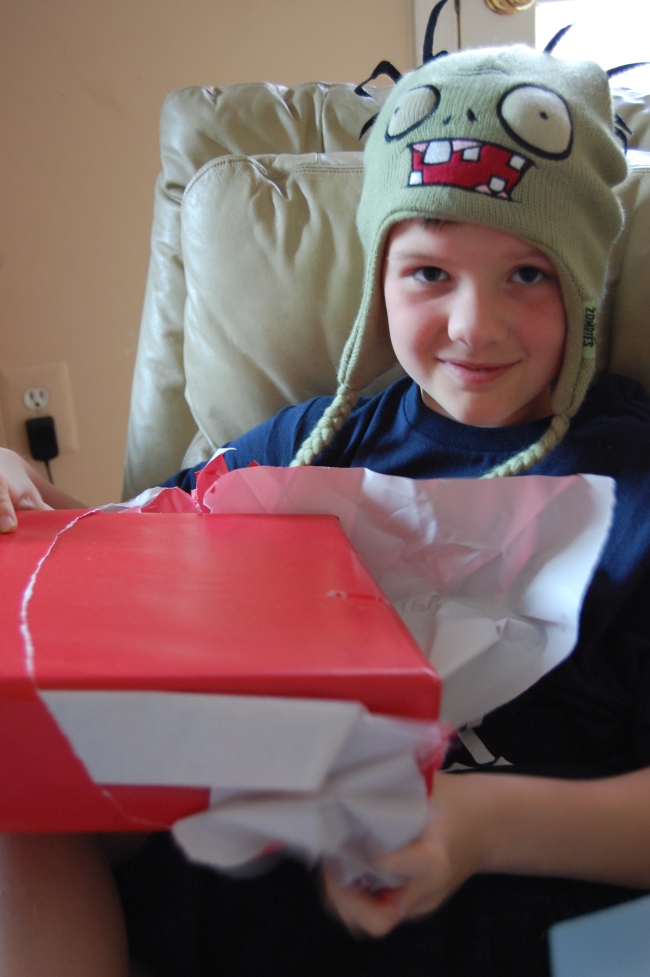 Our oldest had recently completed a 5th Grade project called “Discovery”.  His teacher organised the class into groups and each group had the objective of setting up and sustaining a colony as a sort of challenge game while he also teaching the students about aspects of the history of colonial America.  As such, we decided an appropriate day trip would be to Jamestown Settlement where the colony of 1607 has been set up as a “living museum” of replica houses, Indian village and ships.  Last time I was at Jamestown was 19 years ago and I was devoured by insects.  I had only recently developed an allergic response to such bites in the form of cellulitis swelling which had me blowing up like a blimp.  However, the infection from those particular bites led to septicaemia and a short spell in hospital followed by a long spell of antibiotics.  That experience took some of the gloss off my memories of Jamestown but I still remembered it as being worth visiting.

The very long and tedious journey down served as a bum-numbing reminder of how vast Virginia actually is.  It was made even longer by being snaggled up in construction related traffic jams.  We pit-stopped off for breakfast in Fredericksburg at Shoney’s just in time for its breakfast buffet since the Birthday Boy is such a fan of breakfast food.  We happened to mention to our server that it was our son’s birthday so he was given a birthday sing-song and a chocolate fudge cake in celebration.  He was embarrassed and found the attention awkward but accepted it with good grace and gratitude.  I thought it was thoughtful and sweet.

The actual outdoor exhibits at Jamestown had not changed at all since my last visit but in place of the once small and traditional museum there is now a massive interpretation centre that houses not only the exhibits but also shows a movie and contains a large shop and lots of facilities.  The film shown was similar to the one I saw all those years ago but as well as covering the colonists and the Indians they had built in a section about the Angolan slaves who were brought to Jamestown.  They also no longer even referenced the romantic story about Pocahontas saving John Smith’s life.  Both are positive and welcome changes.

We started with the colony as that was where our kids scampered off to.  The boys all enjoyed exploring each building.  The littlest liked trying out the rope sprung beds and was desperate to climb into the pew in the church.  The 7 year old liked the musket firing display.  The oldest liked seeing how everyone lived and details like the tobacco leaves hanging from the rafters.  The 8 year old meanwhile decided to play with the dried dirt on the ground, calling it “spirit dust”, filling the pockets of his shorts with it and sprinkling it all over the place to determine where to go to.  Off-task much? 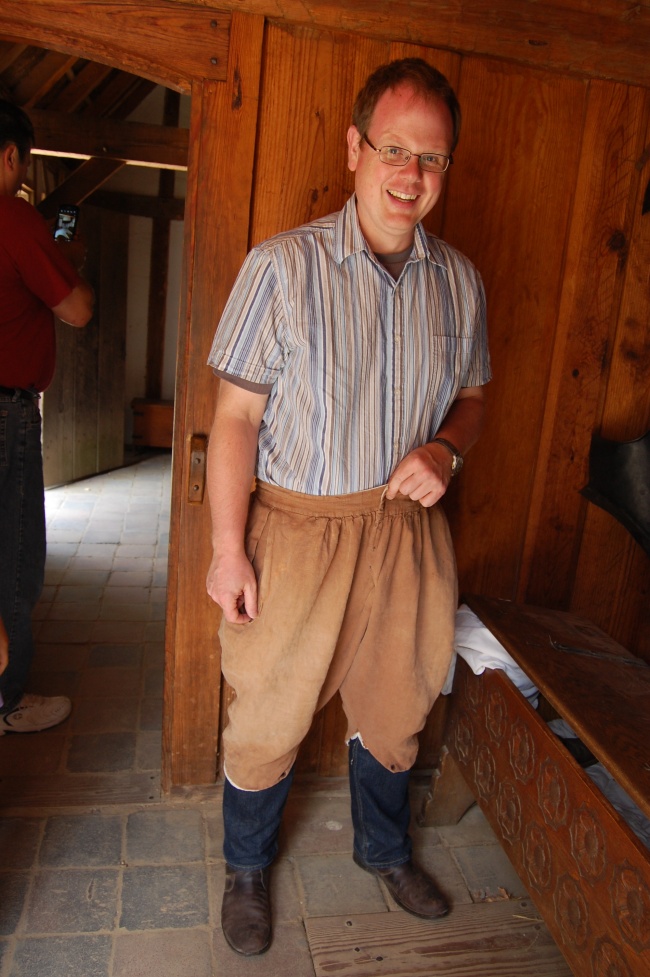 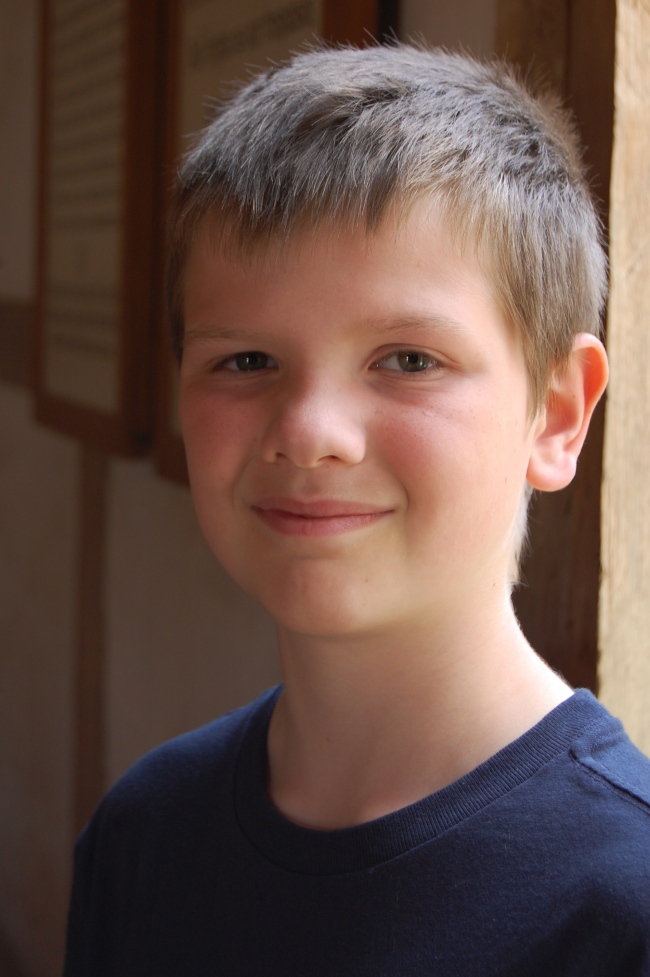 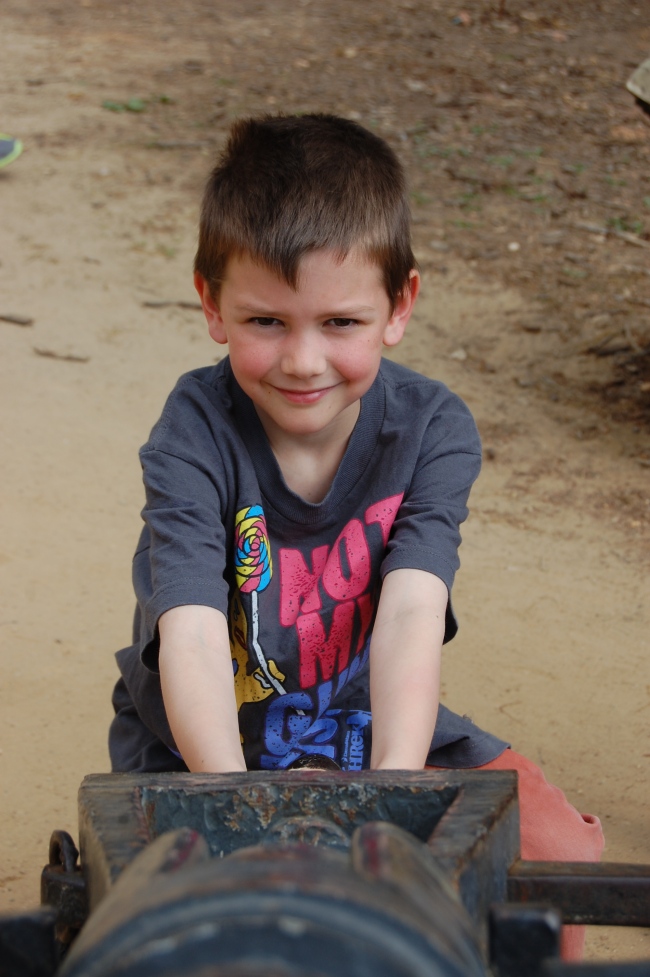 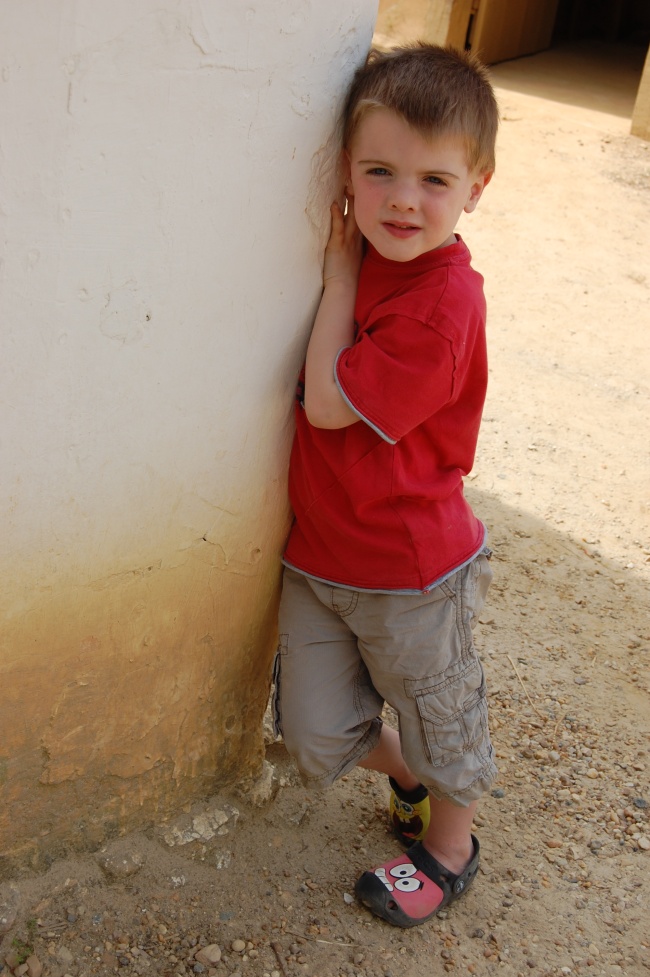 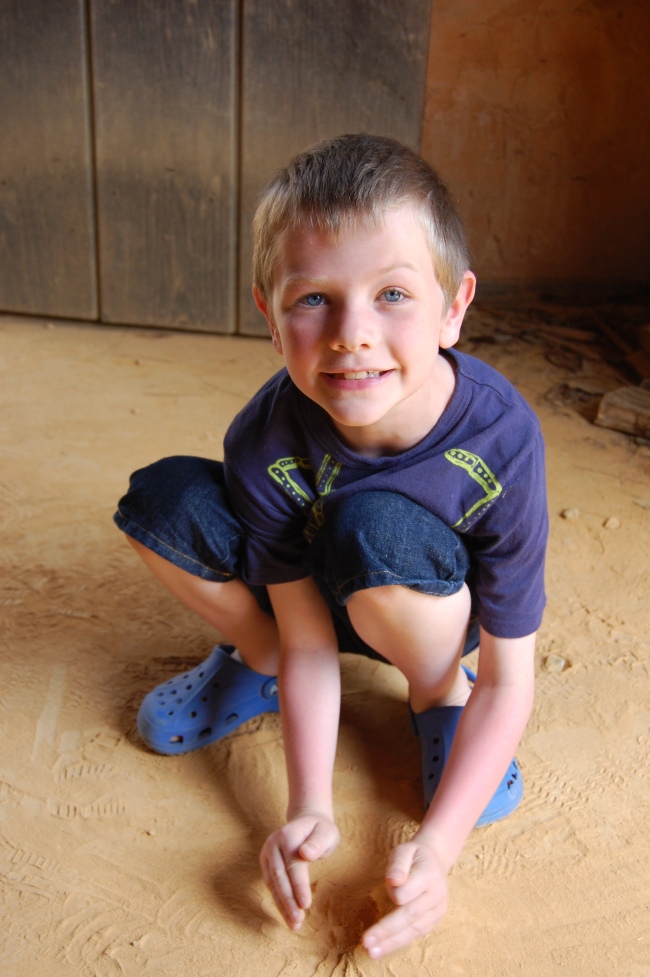 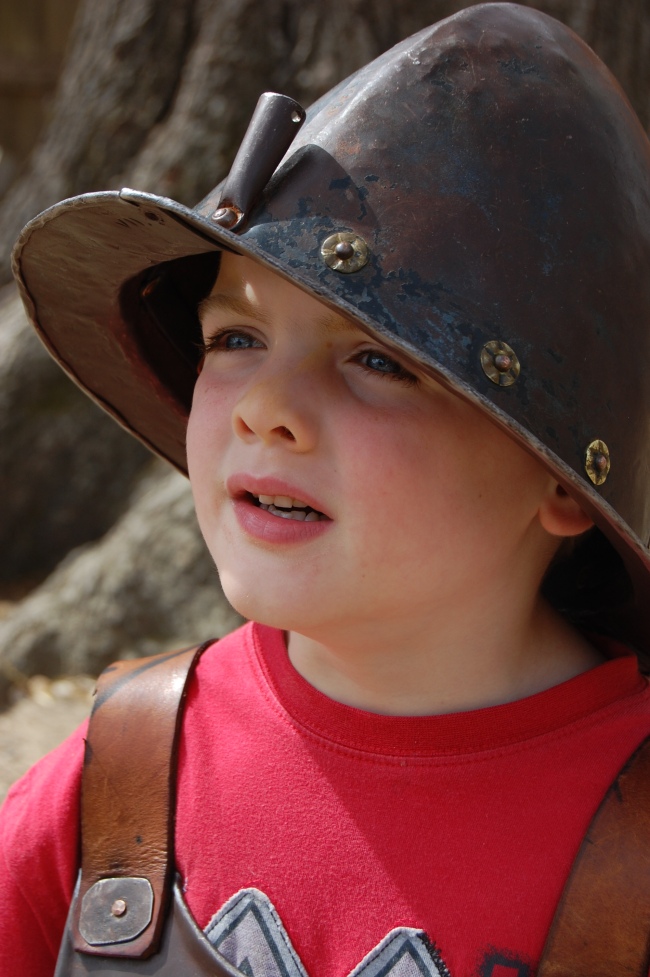 The settlement also showcases replicas of the original three ships – the ‘Susan Constant’, ‘Discovery’ and ‘Godspeed’.  All the boys thoroughly enjoyed exploring the boats, especially the ‘Susan Constant’ since it was the largest.  It was hard to imagine how such small and ultimately pretty fragile boats had undertaken that crossing and how they had fitted enough people and provisions on board to even begin to establish a viable colony.  The small size of them did however mean that we were comfortable just letting the kids have the run of the place so they soon settled into playing some sort of pirate game, not historically faithful or even relevant but fun all the same. 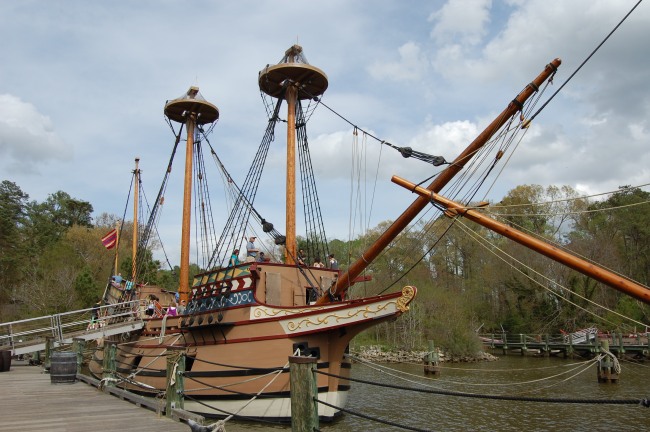 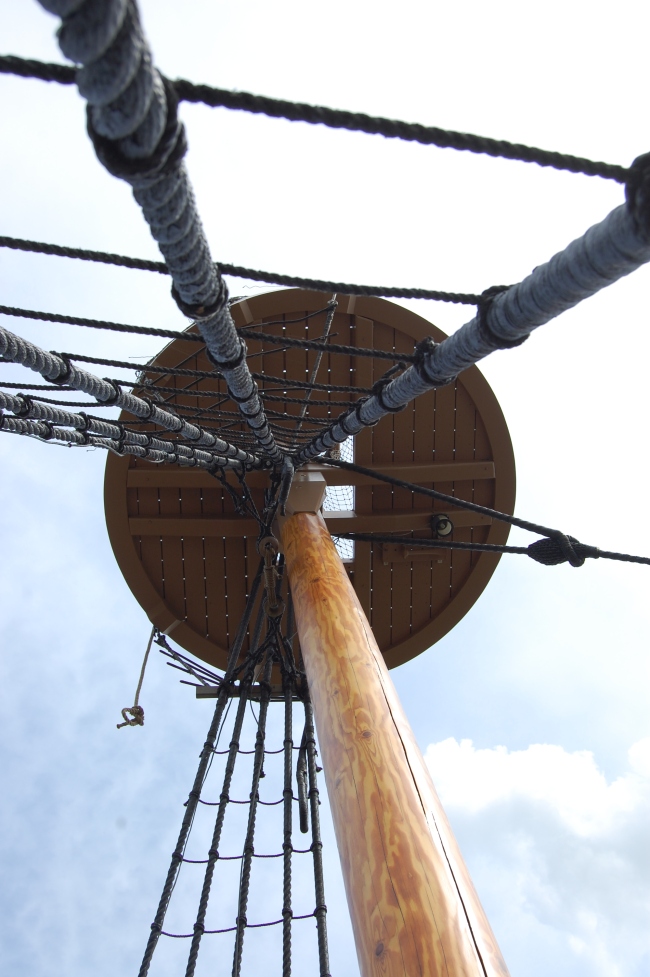 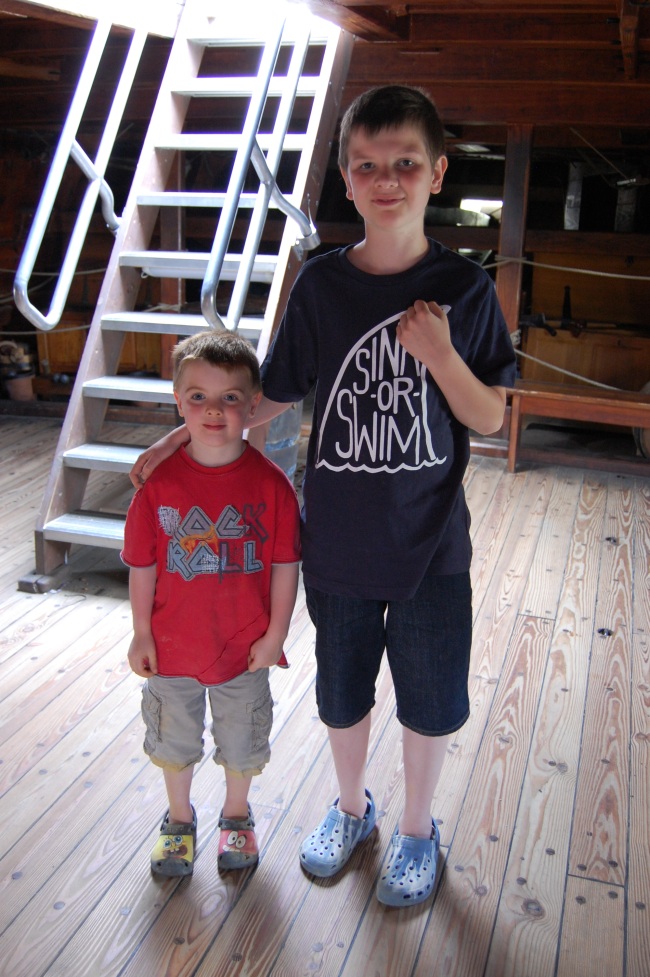 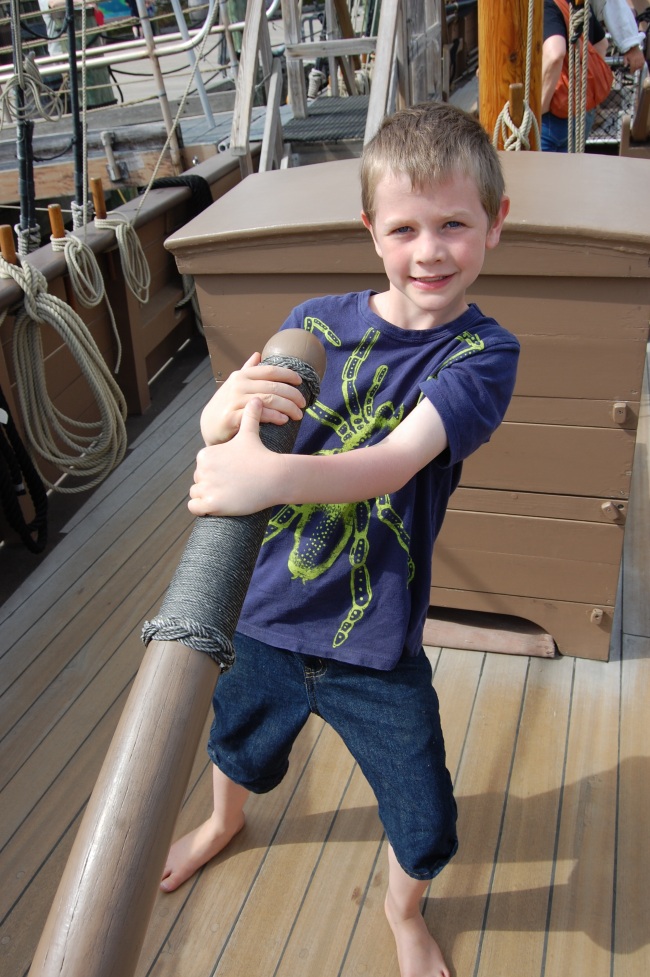 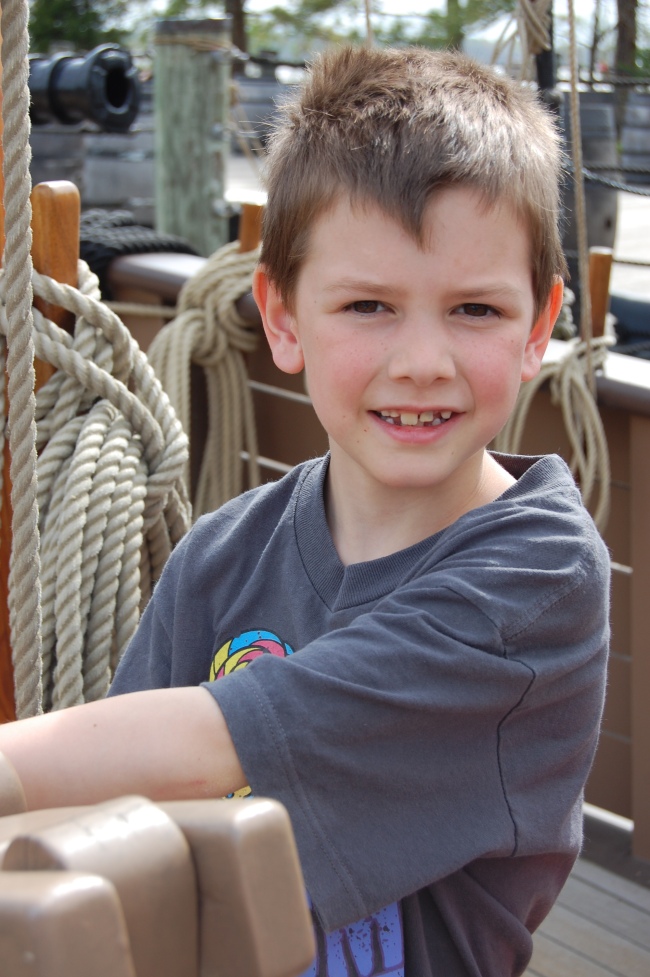 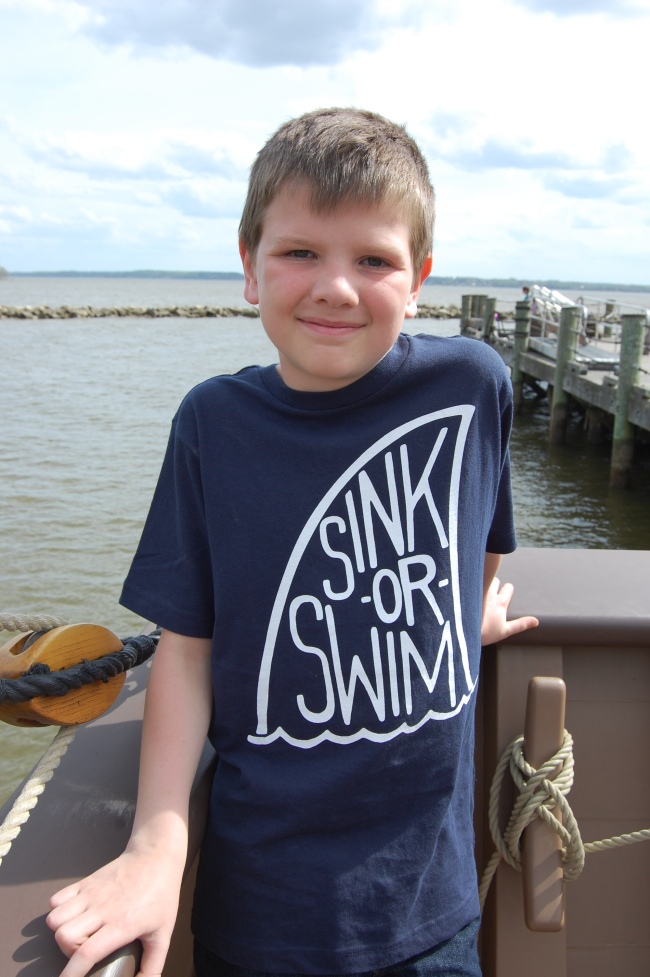 We then explored the Powhatan village.  The kids all loved that section of the site and it became their favourite bit of the trip.  They especially liked seeing all of the fur pelts hanging from the walls of the houses which ranged from squirrels and raccoons through to bobcats, wolves and even a bear.  Our 7 year old also liked seeing a deer hide strung up and being turned into leather using oyster shells to scrape off the hair. 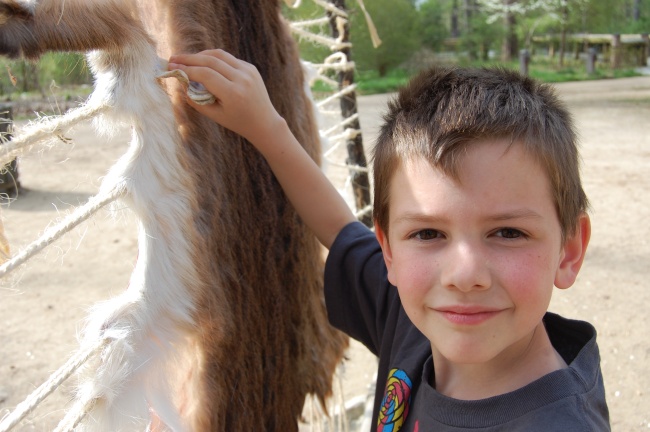 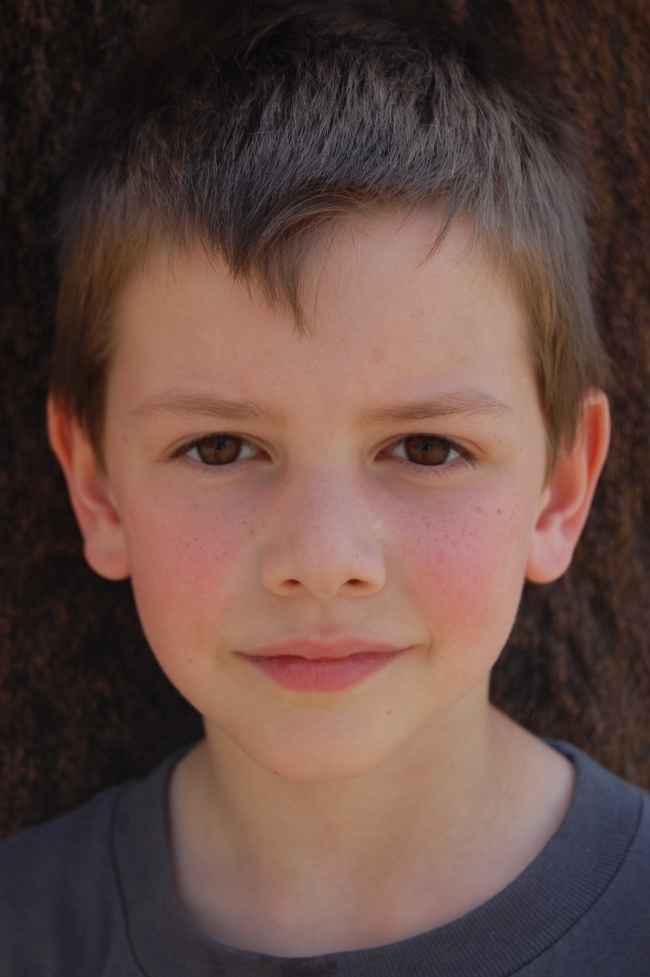 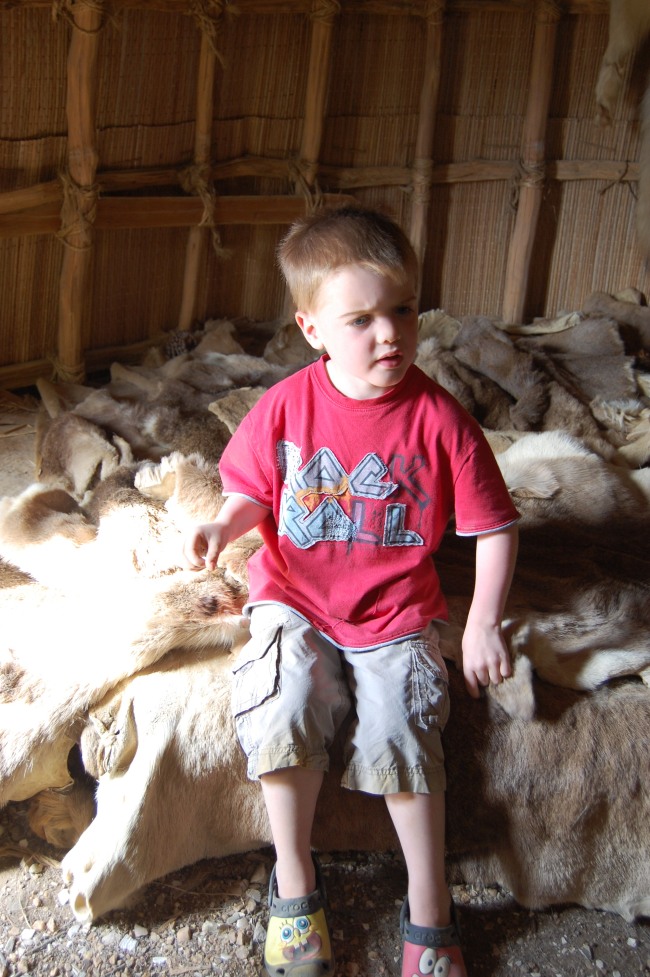 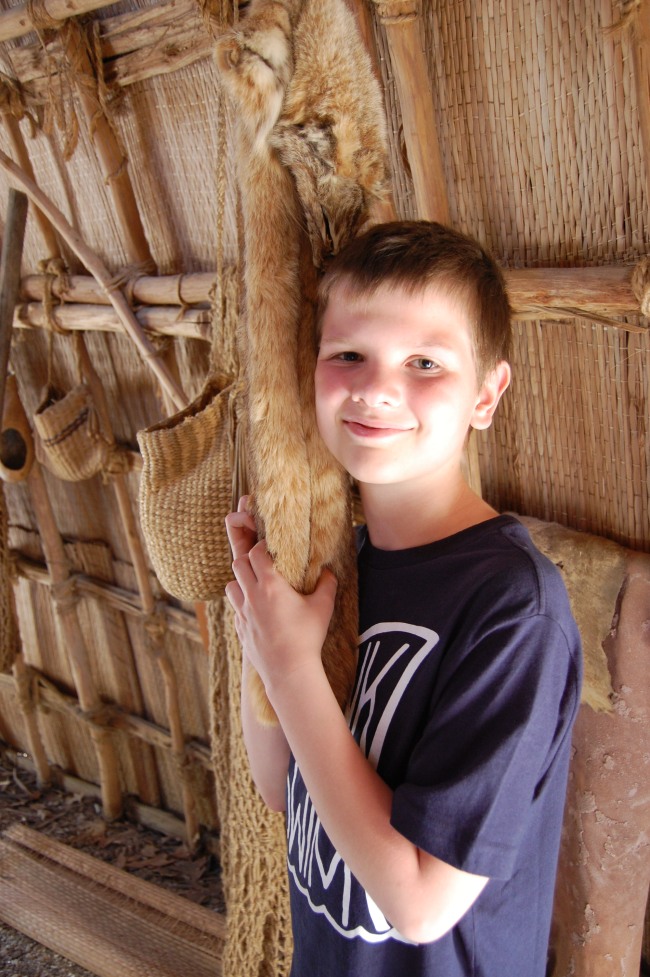 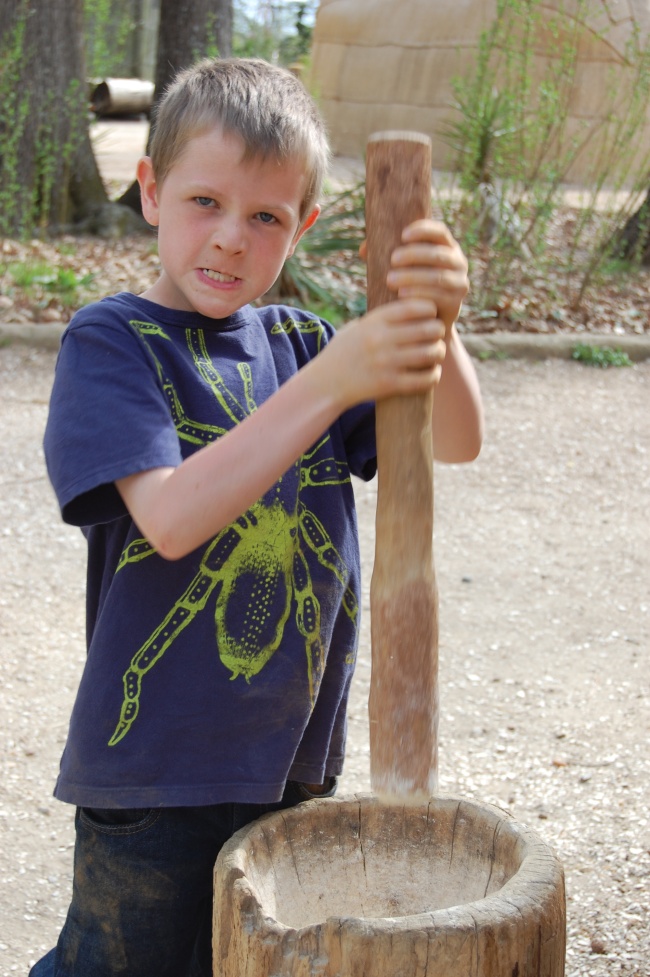 On the way home, we stopped off in Fredericksburg again for our freshly-minted 11 year old’s birthday dinner.  We ate at Chilli’s since that is his favourite restaurant (so far!) and we experienced some of the best service we have ever had as a family as the waiter brought refills without being asked and knew the balance between checking on us and leaving us be.  We were all actually still quite full from breakfast so we ended the day stuffed well beyond our gunnels.  Vacation bellies.

One thought on “Spring Break Day 3 – A Birthday and Jamestown”