I think Americans call it sledding.  I actually don’t know which is the correct term.  Maybe only my family calls it sledging for all I know.  Anyway, I grew up calling it sledging so I am sticking with that.  I will also probably never refer to trousers as pants.  Old dog, new tricks and all that.

So sledging is what the Pict family did this last weekend.  We had a massive dumping of snow in suburban Philadelphia – deep snow by my standards anyway.  It reminded me of the snow I used to experience growing up in Fife during the 1970s and 80s: proper snowman-building, snowball pelting and, yes, sledging snow.  Our rental house comes with a shed and in that shed are some sledges so we packed those into the boot of the car (I might one day demur to it being called a trunk here), swaddled our children in layers of clothing and set off for the nearby state park which we had noted on our last visit had a slope nature clearly intended for just this purpose.

Forgive me if I’m repeating myself but where we moved from, on the West coast of Scotland, we didn’t experience much in the way of proper snow.  We did get snow, it was certainly often cold enough, but it either never settled or lasted long because of all the salt air involved in living on the shore of a sea loch.  We got ice in abudance, plentiful hail storms and terrible deluges of brain-freezing rain but proper snow was a rare occurrence for us. Of course, snow would land and settle in the mountains and sometimes the mountain pass that we drove through to get to the city would close off as a result but whenever proper snow appeared we had to be sure to make the most of it as we knew it would not last.  Consequently my children had never been sledging before.  Well I think they may have been pulled along a path while sitting on a sledge once but that was lame and surely doesn’t count.

My 8 year old didn’t want to sledge.  He’s not really into physical pursuits, preferring activities that are creative, imaginative and preferably indoors.  He, therefore, spent his time running up and down the slope (sometimes becoming an additional obstacle) and jumping up and down in the snow drifts at the bottom of the slope and making snow angels.  The other three boys, however, had a blast sledging, sometimes at high speeds, downhill.  This was especially true of my 6 year old who is possibly emerging as a bit of an adrenalin junkie.  After one slide down with his daddy, he was gung ho about going down solo and did so with gusto.  Over the course of the two hours we were there he was managing to steer and slide with increasing confidence in his efforts to come to a stop further and further from the bottom of the slope.  He loved it.  The only person who possibly loved it more was my husband.  As soon as he saw that all the other dads were hurtling downhill on sledges and inflatable tubes and the occasional snowboard, he too was taking his turn on the sledges.

No doubt we will go sledging again when the next big snowfall happens.

Here are some photos from my kids’ first experience of sledging.  Or sledding.  Or tobogganing. 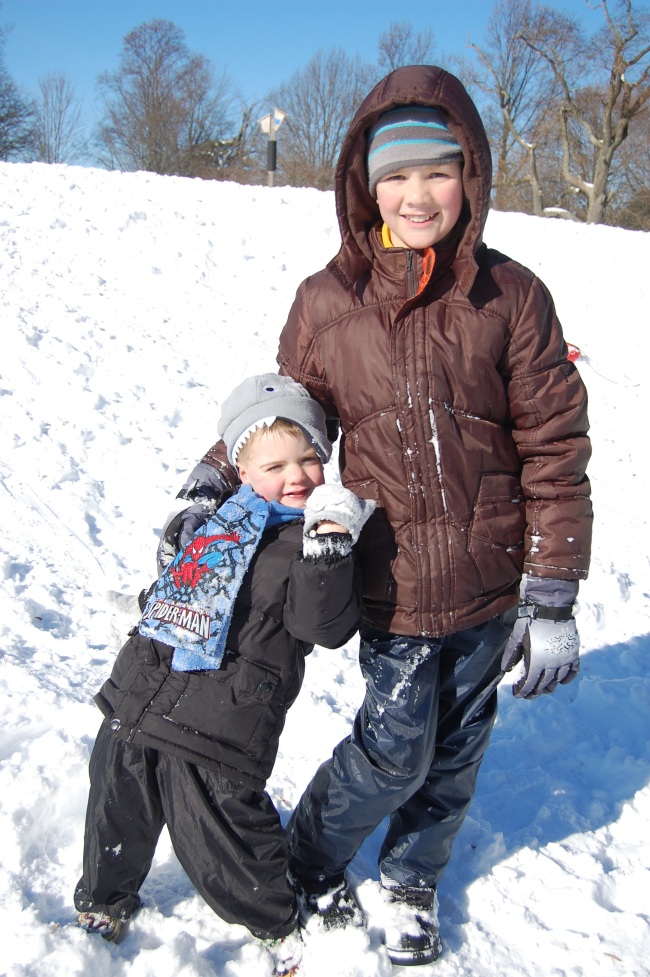 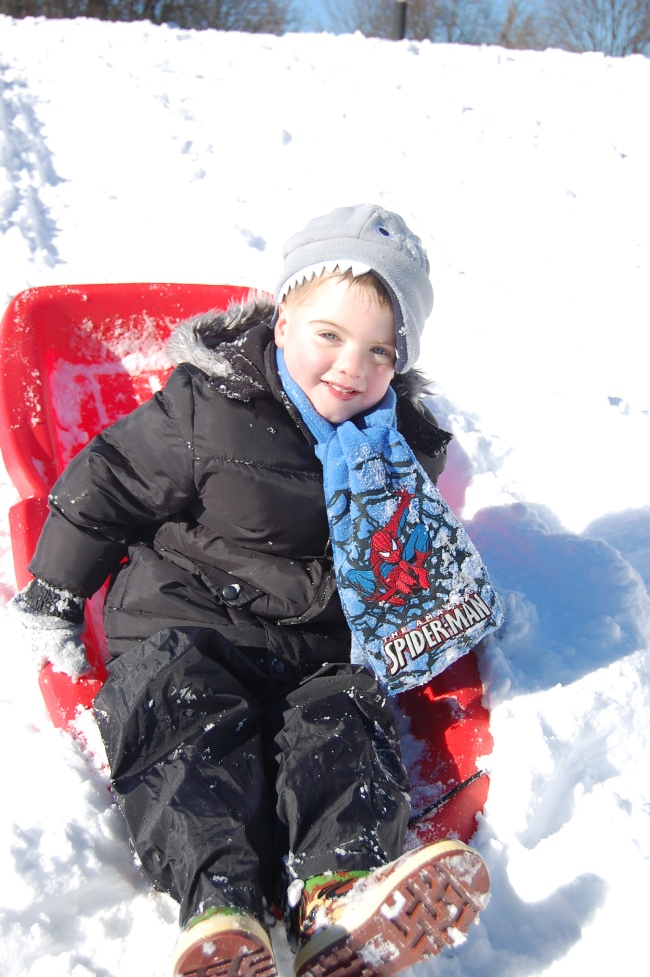 And a photo of me too just for the merry heck of it.